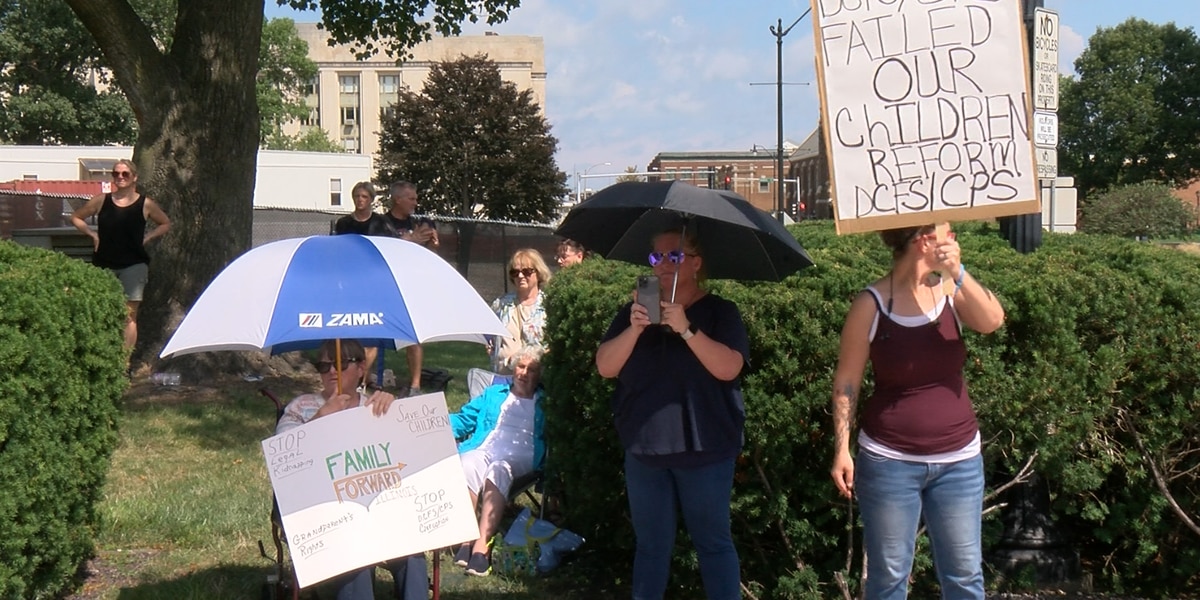 SPRINGFIELD (WGEM) – AJ Freund, Rica Rountree and Navin Jones are just some of the children who died while in the care of DCFS. Advocates gathering outside the Illinois Capitol on Monday want to see significant reforms in the Department of Children and Family Services to keep children safe.

The small group of about 25 people said something needed to be done soon to address the foster care crisis in Illinois and hold the agency accountable.

Some have lost grandchildren to DCFS due to mental health issues or disabilities within their families. Others have survived the state’s foster care system, but want to see reform to prevent the same abuses they suffered years ago.

Trea Jackson said people were afraid to talk about the foster care system when she was younger, but she thinks it’s time people learned about the traumatic experiences some young people in care go through.

“Change your name. Make it a new system, then get a better result,” Jackson said. “I think DCFS is tied to so many bad and negative stigmas. Let’s just start again.

Jackson told supporters that Illinois should promote more “family first” policies to keep loving family members together. But if children are to be cared for by the state, Jackson stressed that they shouldn’t be abused further. She feels Illinois needs to drastically change the agency now so there are more stories of survivors instead of failures.

“They operate above the law,” said Amanda Beyers. “And we need to put in place a system where their wrongdoings and their levels of corruption and illegal offenses are held accountable. No child should die on their watch.

Beyers started a nonprofit three years ago to provide support for victims and survivors of the DCFS system and to empower social workers. DCFS Undercover now has over a thousand members on Facebook who frequently interact with Beyers.

While Illinois lawmakers have appropriated historic funding for the agency, Beyers believes more money should be spent on family reunification instead of keeping children locked up in psychiatric wards.

DCFS Director Marc Smith has come under intense scrutiny from lawmakers and lawyers as a Cook County judge found him in contempt of court 12 times this year for allegedly failed to properly place young people in care. The Illinois Office of the Auditor General also documented 30 issues within the agency during a compliance review spanning 2018 through June 2020. Eighteen of the 30 issues were repeat findings that the Auditor General wanted DCFS to fix in the past.

Jackson said DCFS promises to protect children. Still, she said the agency let her and many others down.

“When a kid comes up to you and says, ‘Hey, I’m being abused,’ let’s stop that. Let’s look at that,” Jackson said. “Let’s advocate for them instead of against them.

Jackson worked with Rep. Tom Morrison (R-Palatinate) to amend the Foster Children’s Bill of Rights last year to help DCFS youth become independent as they age out of the system. Governor JB Pritzker signed the bill into law in May to ensure these teens have the education and life skills they need to be productive as adults. The law requires DCFS to enroll youth in independent living service programs before they leave foster care. Under the plan, youth in care should learn to be self-sufficient in employment, finances, meals and housing while setting long-term goals before adjusting to life outside the system.

Jackson is grateful that Morrison’s bill has been signed into law, but she noted that DCFS leaders need to listen to more ideas from former foster children who know the trauma these young people still go through.

“It’s important that children start learning at 14 or 15 so that we can slowly prepare them and give them the education they need so they don’t end up homeless or unprepared like I was. . “, said Jackson. “It took me a while to catch up”

“While previous administrations and general assemblies have gutted DCFS, under the current administration, Illinois’ child welfare system has received hundreds of millions of dollars in additional funding,” Bill McCaffrey said. . “We have made significant and measurable progress as a result, including hiring more staff, increasing support for our private partners and addressing some of the long-standing challenges facing the department after years of neglect.”

Latest news on Russia and the war in Ukraine

User experience is at the heart of a successful job search, says director of Singapore’s MyCareersFuture portal