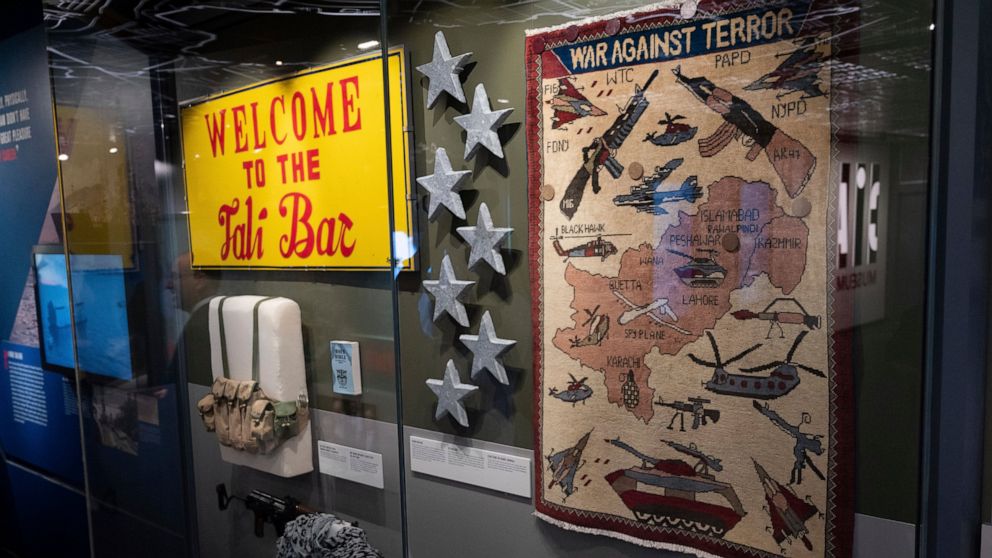 McLEAN, Virginia — The CIA has revealed a model of Ayman al-Zawahri’s safe house, used to brief President Joe Biden on the al-Qaeda leader’s whereabouts before the agency killed him in a raid. drone strike in Afghanistan.

Shortly after al-Zawahri’s death, White House officials released a photo showing Biden talking to CIA Director William Burns with a closed wooden box on the table in front of them. Now the contents of the box – a model of a white-walled house with at least five stories and three partially darkened balconies – are on display at the CIA Museum inside the agency’s headquarters in Virginia.

The museum is closed to the public and access is generally limited to agency employees and guests. The CIA allowed journalists to tour the newly renovated museum in time for the agency’s 75th anniversary, as part of a larger effort to showcase its history and accomplishments.

Most exhibits took years or decades to be declassified. The al-Zawahri model house is the rare artifact that had been used by intelligence agents a few weeks earlier.

Al-Zawahri was killed in late July, nearly a year after the US withdrew from Afghanistan, ending a two-decade war in which the CIA had a central role. The agency sent in the first US forces two weeks after the September 11, 2001 terrorist attacks. Two decades later, it withdrew its intelligence assets and assisted in the chaotic evacuation of thousands of US and Afghan allies.

The Biden administration said the strike shows it retains what it calls an “over the horizon” counterterrorism capability in Afghanistan. Opponents of the administration and some analysts question whether al-Zawahri’s presence in a Kabul neighborhood suggests that extremist groups like al-Qaeda or the Islamic State are gaining strength under the Taliban, who now rule the country.

The strike was particularly significant for the CIA, which lost seven employees trying to track down al-Zawahri, a key plotter of the 9/11 attacks who was then al-Qaeda’s second-in-command.

They were killed when a Jordanian doctor who claimed to have information on al-Zawahri carried out a suicide bombing in 2009 at a base in Khost, Afghanistan. The doctor worked for al-Qaeda.

Near the model of al-Zawahri’s house are displayed seven stars honoring CIA employees killed in Khost. The stars were previously part of a memorial in Afghanistan that was taken down when the United States withdrew.

Other recently revealed artifacts include concept art for the fake movie created as part of a 1980 operation to rescue American diplomats from Iran, the subject of the 2012 film “Argo” starring Ben Affleck. There are also crew uniforms and other items from the Glomar Explorer, the ship built by Howard Hughes that served as cover for a 1970s mission to bring a sunken Soviet submarine carrying nuclear ballistic missiles. (The Los Angeles Times front-page story exposing the operation is reproduced on a nearby museum wall.)

The museum also includes information on the agency’s darkest times, including its role in the ultimately false claims that Iraq possessed weapons of mass destruction prior to the 2003 US invasion, as well as the exposure and the execution of several key spies the United States had in the Soviet Union.

Janelle Neises, the museum’s deputy director, says a running agency joke about the collection is that for most people it’s “the greatest museum you’ll ever see”.

The CIA wants to use its story to engage more with the public, albeit on the narrow terms one would expect of an intelligence service. The number of annual visitors to the museum, for example, is classified. Among the known guests are U.S. lawmakers, officers from other law enforcement and intelligence agencies, and foreign officials.

But CIA employees post about the museum’s roughly 600 exhibits on social media. The agency also recently launched a podcast with Burns, the director of the CIA, as its first guest.

One of the museum’s main goals is to reinforce lessons learned from the agency’s successes and failures for today’s workforce, Neises said. Some CIA veterans who served in the missions depicted in the museum have donated artifacts to the collection. But the agency is now hiring officers in their twenties who are too young to remember the September 11, 2001 attacks.

“The idea here is that you go to lunch or you go to a meeting, leave 10 minutes early, leave 20 minutes early and just take the time to watch a section and really learn about your story,” says Neises.