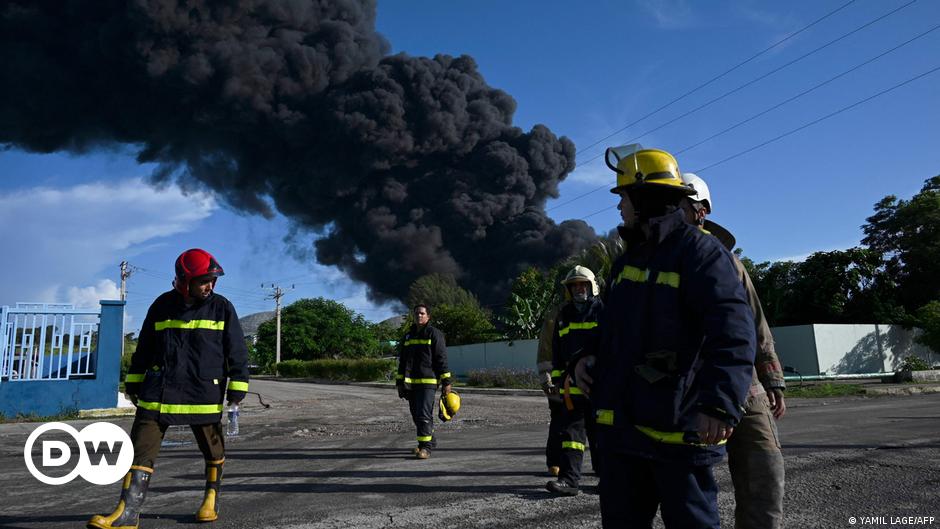 At least one person has been killed and 121 others injured after a fire sparked explosions at a fuel depot in northwestern Cuba, officials said on Saturday. At least 17 firefighters are still missing.

The fire started overnight after lightning struck a crude oil storage tank on the outskirts of the city of Matanzas, Cuba’s official news agency reported.

By Saturday morning, the flames had spread to a second storage tank and were threatening other tanks nearby.

Provincial health official Luis Armando Wong told a news conference that a body had been found at the site.

Some 1,900 people have been evacuated from the affected area, officials said.

The Presidency of the Republic said that the 17 missing people were “firefighters who were in the nearest area to try to prevent the spread”.

The presidency also tweeted that five people were seriously injured and three in very serious condition.

The injured were transferred to hospitals in the capital, Havana, about 100 kilometers (62 miles) from the storage facility.

Among the injured was Energy Minister Livan Arronte.

The Matanzas supertanker base is about 100 kilometers from the Cuban capital, Havana

The Cuban government said it has requested help from international experts in “friendly countries” with experience in the oil sector.

President Miguel Diaz-Canel expressed his gratitude to the governments of Mexico, Venezuela, Russia, Nicaragua, Argentina and Chile for their offers of assistance.

The first support flights from Mexico and Venezuela were due to arrive on Saturday evening.

“We also appreciate the offer of technical advice from the United States,” he added. The United States has had sanctions against the Caribbean country for six decades.

“The sky was yellow”

Hundreds of residents were evacuated from nearby neighborhoods as plumes of black smoke filled the sky.

“We threw ourselves out of bed; when we went out into the street, the sky was yellow,” Ginelva Hernandez, 33, told the AFP news agency. She was sleeping with her husband and three children when the explosions occurred. “The fear of people on the streets is out of control,” she said.

President Diaz-Canel visited the scene Saturday morning and tweeted that rescuers were “trying to prevent the spread of flames and any fuel spillage” in Matanzas Bay.

The blaze comes as Cuba grapples with fuel shortages and daily power outages amid severe summer heat. Any loss of fuel at the facility, which stores petroleum used for power generation, will likely worsen the situation.

Jorge Pinon, director of the Energy and Environment Program for Latin America and the Caribbean at the University of Texas at Austin, said the region has eight large reservoirs with a capacity of 300,000 barrels each.

“The area is a transshipment point for fuel to various thermoelectric plants, not just the nearby one, so this could be very bad news for the power grid,” he said, as quoted by Reuters news agency. .

Earlier this year, Cuban authorities began imposing hour-long blackouts in some areas, leading to protests in some parts of the country.