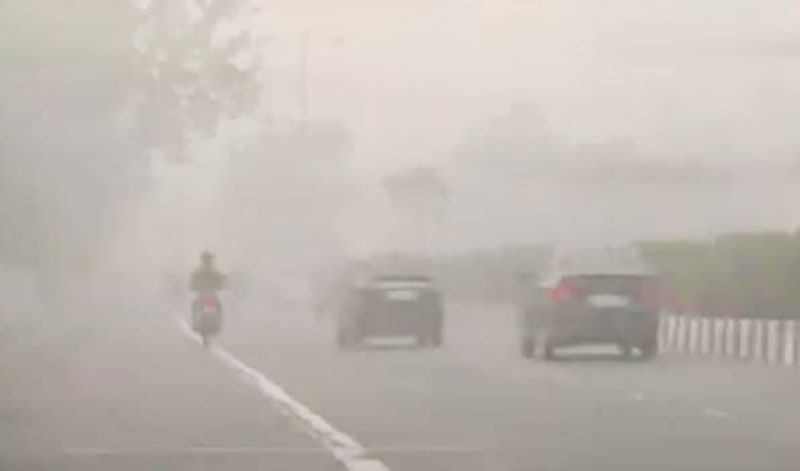 New Delhi / UNI: After a bit of a respite from pollution, air quality in the nation’s capital slipped back into the “very bad” category on Wednesday, as the Air Quality Index (AQI) amounted to 328, according to the System of Air Forecasting and Research Quality and Weather (SAFAR).

Tuesday’s Air Quality Index (AQI) was registered at 282, which was in the mediocre category.

According to the SAFAR bulletin, from November 27, local surface winds are expected to increase, resulting in improved air quality.

“The effective number of farm fires has been reduced to 770 and its contribution to Delhi’s PM2.5 on Wednesday is 3% according to the agency,” the agency said.

The concentrations of PM 2.5 and PM 10 were respectively 156 in the “very poor” category and 292 in the “poor” category around 11 am, according to the agency.

Several areas of the national capital, including ITO, Lodhi Road and Mathura Road, recorded “very poor” air quality with an AQI of 333, 303 and 346 while the AQI at Anand Vihar and Jahangirpuri was in the “serious” category with an AQI 422 and 436 respectively.

Meanwhile, the Delhi government lifted the ban on construction activities on Monday after marginal improvement in air quality in the nation’s capital, but schools will remain closed until further notice.

Earlier in its Sunday ordinance, the Delhi government extended until November 26 the ban on entering the city of trucks carrying non-essential goods and working from home for its employees.

According to the Indian Meteorological Department (IMD), the skies will remain clear with minimum and maximum temperatures likely to hover around 9 and 27 degrees Celsius respectively.