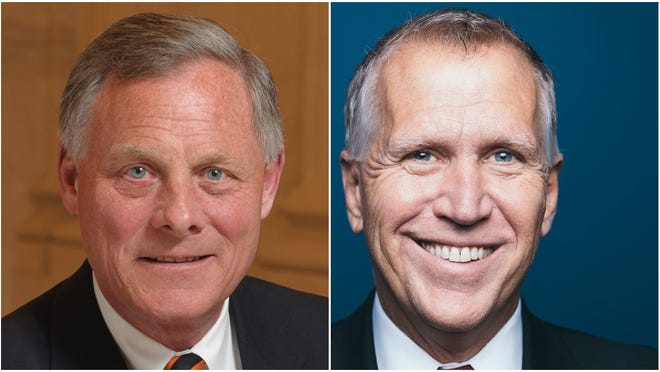 WASHINGTON — Here’s a look at how members of the Congressional area voted the week before.

There was no key vote in the House this week.

Senate Vote 1: COURT OF APPEAL JUDGE: The Senate has confirmed the nomination of Stephanie Davis as a judge on the United States Court of Appeals for the Sixth Circuit. Davis, a U.S. district court judge in Michigan since late 2019, was previously a federal justice of the peace, assistant U.S. attorney and attorney in private practice in Detroit. The vote on May 24 was 49 yes to 43 no. NOPE : Burr R-NC, Tillis R-NC.

Senate Vote 2: ELECTION MONITORING: The Senate has confirmed the nomination of Dara Lindenbaum as a member of the Federal Election Commission. Lindenbaum had recently served as an election attorney at a private law firm in Washington, D.C. Supporter Sen. Roy Blunt, R-Mo., said Lindenbaum “expressed a willingness to work with the other commissioners and find consensus to do the important work of the agency.” The vote on May 24 was 54 yes to 38 no. NOPE : Burr R-NC, Tillis R-NC.

Senate Vote 3: NEW JERSEY JUDGE: The Senate has confirmed the nomination of Evelyn Padin as a judge of the United States District Court in New Jersey. Padin has been an attorney at her own law firm in Jersey City since 1995. One supporter, Sen. Dick Durbin, D-Ill., said that “Padin’s years of experience with the New Jersey legal system, coupled with her vast legal expertise, make her well suited to sit on the federal bench.” The vote on May 25 was 51 yes to 43 no. YES : Burr R-NC. NOPE : Tillis R-NC.

Senate Vote 4: COLORADO JUSTICE: The Senate has confirmed Charlotte Sweeney’s nomination as a judge of the US District Court in Colorado. Sweeney has been a lawyer in private practice since 1995, specializing in employment discrimination law. One supporter, Sen. Michael Bennett, D-Colo., said Sweeney’s “clear credentials, integrity and indispensable experience more than qualifies her for this role.” The vote on May 25 was 48 yes to 46 no. NOPE : Burr R-NC, Tillis R-NC.

Senate Vote 5: MORTGAGE FINANCING: The Senate has confirmed the nomination of Sandra Thompson as Director of the Federal Housing Finance Agency. Thompson has been a senior agency official since 2013 and was previously a longtime Federal Deposit Insurance Corporation official. One supporter, Sen. Sherrod Brown, D-Ohio, called Thompson an “exceptional candidate, with decades of experience in mortgage markets and federal financial regulation.” The vote on May 25 was 49 yes to 46 no. NOPE : Burr R-NC, Tillis R-NC.

Senate Vote 6: EPA OFFICIAL: The Senate has confirmed the appointment of Henry Christopher Frey as Deputy Administrator of the Environmental Protection Agency’s Office of Research and Development. Frey was a public servant in various roles at the EPA, from 2006 to 2018, and a professor at North Carolina State University since 1994. One supporter, Sen. Tom Carper, D-Del., Frey said” has the experience, intellect, and integrity to lead this much-needed office.” One opponent, Senate Minority Leader Mitch McConnell, R-Ky., criticized Frey’s past support for restrictions on emissions from economically harmful power plants. The vote on May 25 was 51 yes to 43 no. YES : Burr R-NC. NOPE : Tillis R-NC.

Senate Vote 7: GOVERNMENT WORKER EVALUATIONS: The Senate confirmed the appointment of Cathy Harris as a member of the Merit Systems Protection Board for a seven-year term ending in 2028. The Board hears disciplinary appeals and other grievances filed by federal government employees. Harris had been a private practice attorney in Washington, DC, specializing in employment law. The vote on May 25 was 48 yes to 46 no. NOPE : Burr R-NC, Tillis R-NC.

Senate Vote 8: DOMESTIC TERRORISM: The Senate rejected a motion of closure to end debate on a motion to pass the Prevention of Domestic Terrorism Act (HR 350), sponsored by Rep. Bradley Scott Schneider, D-Ill. The bill would authorize actions against domestic terrorism by the Department of Justice, the Federal Bureau of Investigation and the Homeland Security Department. One supporter, Senate Majority Leader Chuck Schumer, DN.Y., said, “This bill will give the government the tools to monitor, find and stop these evil actors before they have the possibility of inflicting violence on their communities”. One opponent, Sen. Rand Paul, R-Ky., said it would wrongly create new government powers to investigate soldiers and others based on a presumption of guilt. The vote on May 26 was 47 yes to 47 no. NOPE : Burr R-NC, Tillis R-NC.

Senate Vote 9: FOREIGN SERVICE: The Senate confirmed the appointment of Marcia Bernicat as Director General of Foreign Service. Bernicat is a career member of the State Department’s Foreign Service, serving in numerous positions, including Ambassador to Bangladesh, Senegal, and Guinea-Bissau. One supporter, Sen. Robert Menendez, DN.J., said Bernicat “has a deep understanding of the inner workings of the Department and valuable overseas experience.” The vote on May 26 was 82 yes to 10 no. YES : Burr R-NC, Tillis R-NC.