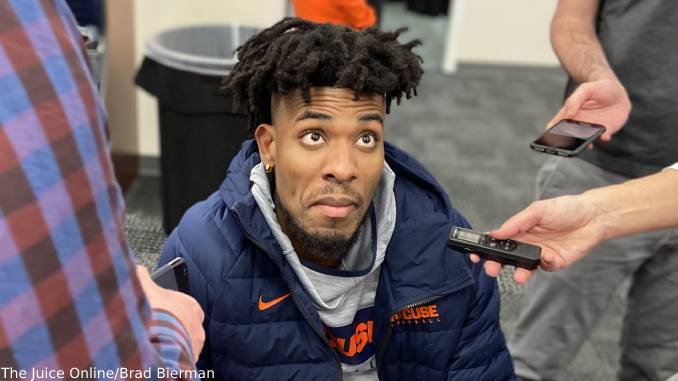 How Syracuse basketball and soccer relate to the transfer portal

With the Syracuse basketball team recently swapping reserve centers and their soccer counterparts bringing in a top quarterback prospect through their respective transfer portals, it’s pretty clear the Orange are invested. in the collegiate form of free agency.

Although these two programs are in different locations and have different reputations in their respective sports, there are certain threads the pair share. Basketball and its much smaller roster allow for a quick analysis of SU’s place in the new world of the transfer portal.

Syracuse basketball and football players can mainly be categorized into four barrels:

The first group is self-explanatory, filled with players who had a starting spot or filled a rotation role large enough in the most recent season to suggest the same or more playing time in the future. The final group is filled with fringe players who recognize they won’t earn a much bigger role in the game, but are happy with the overall experience at SU.

Basketball players often find themselves in their corresponding barrel quickly while their football counterparts, due to the large number of players on a roster combined with different physical development needs, often take a bit longer to land in the appropriate barrel.

The middle two barrels are where things get fluid, but the basketball team is full of examples that likely carry over to football.

In analyzing how Jim Boeheim distributes bench minutes last month, I noticed that the players who played the most minutes off the bench for Syracuse tended to do one more thing – transfer off the schedule. After the past eight seasons (the first season in this span is when the Orange pulled out of the playoffs due to an impending NCAA penalty), there were 21 different players who ranked between sixth and eighth. of the basketball team in minutes played (DaJuan Coleman, Frank Howard, and Howard Washington have each done it twice). One of those players, Chris McCullough, who likely would have finished in the top five within minutes in his only season-ending injury-free season, turned pro.

Of the other 20 players, 11 have chosen to leave SU. This transfer total does not include Quincy Guerrier, as he was transferred after finishing second in minutes played after finishing sixth the previous year. And most of those players left long before the transfer portal existed.

Ron Patterson, BJ Johnson, Kaleb Joseph, Taurean Thompson, Matthew Moyer, Jalen Carey, Brycen Goodine, Howard Washington, Kadary Richmond, Robert Braswell and Frank Anselem all transferred out of the Orange program around this time. While most had different circumstances leading up to their departures, all fall neatly into one of two “play more” barrels.

Some saw their roles dwindle at SU (Joseph, Moyer) while others wanted more opportunities as their path to playing time was blocked (Anselem, Carey). Most dropped out of competition, landing in programs outside of basketball’s Power Six.

In any case, the desire for more playing time was driving these player departures, whether the player landed at Seton Hall, Georgia, Butler, LaSalle, Charlotte, or another school.

The arrival of Mounir Hima goes against this current, moving from Duquesne to Syracuse. That said, Syracuse offers the lure of a top-tier program willing to take a chance on a player with potential, even if he’ll be blocked from substantial playing time by Jesse Edwards.

The football team is also involved with the same two barrels of players in the transfer portal, except they are usually on the other end of the basketball schedule. Orange’s football team is half a rung up the ladder, providing a landing place for players in their quest for more playing time while seeing their own players transition to lesser programs.

Bralyn Oliver of Louisville. Michigan’s Dan Villari. Michigan State’s CJ Hayes. Florida’s Carlos Del Rio-Wilson. All moved from higher-profile programs to SU, seeing the Orange as a place to get into programming faster than their previous home.

Typically, players who left the football program did the same. Jarveon Howard was transferred to Alcorn State. Dillon Markewicz left for Texas State. Adrian Cole, Latarie Kinsler and Sharod Johnson have all committed to Florida International. Curtis Harper, who was a rotational player on the defensive line last season, opted for the greener pastures of Akron.

Like fellow basketball player Mounir Hima, Juwuan Price probably didn’t expect to be on the fast track to playing time after stepping up in New Mexico State’s level of competition at Syracuse, as well as a already joining a depth chart with Sean Tucker. above. It’s possible, however, that a depth role at SU this season could turn into a starting point for Price next year.

However you look at it, come or go, Syracuse is a stop in the middle of the road in the transfer portal.