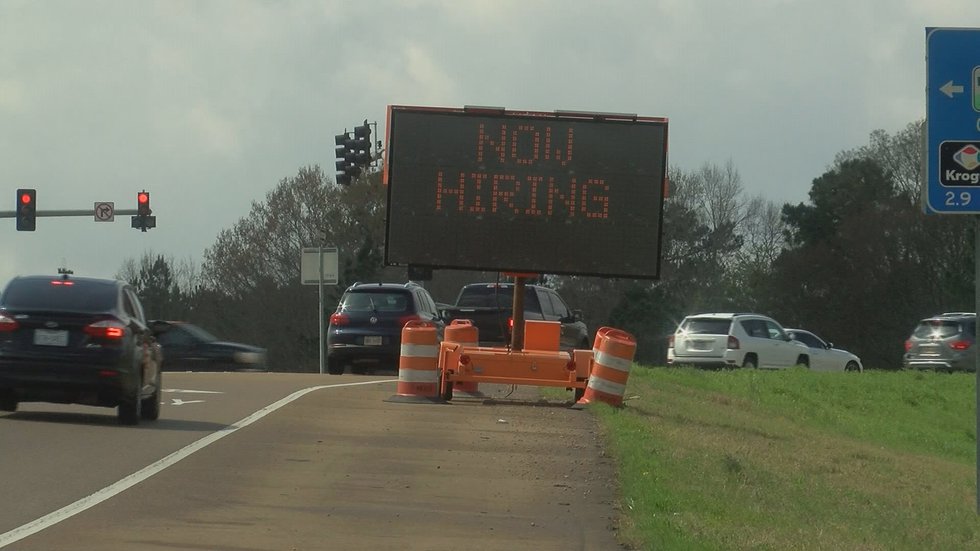 JACKSON, Miss. (WLBT) – If you take the Byram exit southbound on I-55, you’ll likely see a large flashing sign that says MDOT is hiring at its Clinton office.

The sign is an unusual step the Mississippi Department of Transportation (MDOT) is taking to address critical staffing shortages across the department.

MDOT currently has approximately 400 vacancies but is struggling to fill them.

To help bolster its ranks, the department visited colleges and universities to hold job fairs. It is also implementing a new internship program to help fill qualified positions.

However, the agency won’t really be able to solve its personnel problem until it can increase the salaries of employees at all levels. And that’s banking on the legislature this year to give them the power to do that.

The 2022 legislative session ends in about two weeks, and MDOT is asking the state for permission to use a portion of its gas tax funding to raise employee wages to coincide with the new SEC-Squared plan (SEC2), a proposal adopted by Mississippi. State Staff Council designed to make state agencies more competitive with other public sector agencies.

MDOT executive director Brad White said the highways department has the funds to make the new plan work. It just needs legislative authority to do so.

“I just have to have the authority,” he said. “Even with that, we’re not talking about taking money out of construction, but about changing the budget and having different positions.”

White says he’s had conversations with several lawmakers this year and hopes the authority will be granted in the agency’s annual budget bill.

“We constantly have turnover in our lower ranks. Because, again, when you go out to the rural part of the state, where there’s a McDonald’s or a Bumpers, and those employees don’t have to deal with the weather and the challenges of the virus, and they can get into a safe work area and make more money, you know, it’s very difficult for us,” he said. “And that’s gotten us to the point that in some cases we’re down to one or two employees in a county trying to do maintenance.”

Cleaners are the ones who fill potholes, clear streets, and answer calls at all hours of the day and night to pick up debris when it blocks state roads.

He says a shortage of workers means longer response times. It also means that the remaining maintenance workers have larger coverage areas.

“Our floating crews are so poorly equipped that the geographic area is so much larger, and that increases the time they have to respond to needs,” White said.

However, these employees have little incentive to stay. Service technicians earn approximately $9.50 per hour and receive no overtime. They are also not eligible for COVID-19 bonuses like some other public employees have been.

High-ranking positions have also been affected. In 2021, MDOT lost 32 engineers. Since January, other “top people” have left for better positions, Simmons said.

The commissioner says that with fewer engineers, more projects will have to be tendered for design work. He said that fact, coupled with inflation, means that the $962 million in federal infrastructure the state is expected to receive over the next five years will have far less impact than originally projected.

“These projects are going to be delayed because we don’t have the right people to do the design and do the kind of work, so we’re going to have to outsource (and it’s going to) cost us more money. You add that to the rate of inflation going up, and we could very easily be looking at some sort of washout,” he said. “We may not see real growth with the new dollars that we’re going to get.”

The SEC2 project, however, could offer MDOT, as well as other state agencies, some hope.

MDOT also appears to be raising some starting salaries already, based on its website. A transportation engineer position, for example, offers a starting salary of $71,078.45 per year. A comparable position in Alabama offers a salary range of $63.78 to $97,221.60 per year, according to a job posting on the Alabama personnel council website.

“It’s designed to better equip us to be able to meet the needs of agencies…not just hire team members, but promote them and compensate them appropriately based on experience, education and other factors like that,” White said. “I believe this will move the needle in the right direction to help us not only retain the people we have, but also bring in new team members to help us better carry out the mission of our agency.”

A message for Ukraine? Cosmonauts wear yellow and blue flight suits for a trip to the space station