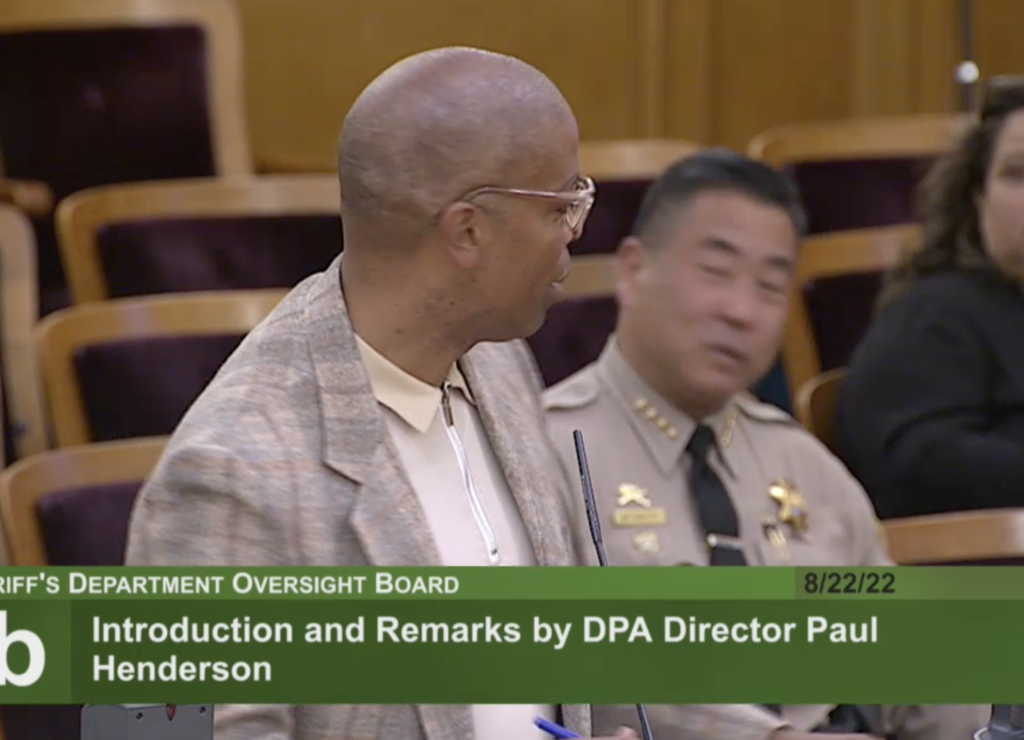 A new commission designed to provide civilian oversight of the San Francisco Sheriff’s Department has finally begun meeting, and there are already signs the mayor’s office is trying to hardwire the process of hiring an inspector general to lead the agency.

The Sheriff’s Department Board of Supervisors was created by Proposition D, an amendment to the city charter in the November 2020 ballot that Breed did not support. Four of the seven council members are appointed by the supes and three by the mayor.

The council is responsible for hiring an inspector general, who will set up a staff to investigate complaints against sheriff’s deputies.

But in the first meeting — and in phone calls with board members before the meeting — Paul Henderson, the director of the Police Accountability Department, played an outsized role in the decision to create a new department.

Henderson works for the Police Commission, which is controlled by the mayor. His record at DPA is far from stellar. From MissionLocal:

The price of investigating nearly 4,000 complaints? Some $7.8 million. The result? Three officers received a 10-day suspension sentence or a more severe result, between 2017 and 2021.

If he’s going to help set up the new agency, that’s cause for concern.

And at the first meeting on Monday, it appeared he was ready to do just that.

In fact, mayor-appointed board member Julie Soo suggested that the council bypass the national search process for an inspector general and simply hire anyone Henderson nominates.

“I understand that you have several candidates who have already been reviewed by the [Department of Human Resources]“, Soo said. “If we have good candidates, we should go to them first.”

Councilman Jayson Wechter, who has spent most of his career working in police oversight, told me that Henderson called him before the meeting to say he had “a list of two or three candidates” to lead the new organization.

At the meeting, Wechter said it was “a very bad path. We want to advertise it publicly, not just go with candidates that only one person knows.

Wechter argued that the panel should hire a staffing firm with experience in civilian law enforcement oversight: “A lot of experts in the field will tell you that,” he said. “I would argue very strongly for a national search.”

The inspector general, Wechter said, will create a new department from scratch that will provide civilian oversight of a law enforcement agency that never had it. “This is the most important decision this council will make,” he said.

The directors of these agencies tend to stay in place for a long time. If you get a weak Inspector General, or someone who is not serious about investigating and holding MPs accountable, the agency will fail.

This has been the case in the past with what is now called the DPA; some administrators who were not interested in being aggressive about misconduct turned the watchdog into a watchdog.

So what exactly does Paul Henderson, who works for another department, do by showing up to the first meeting of the new board of directors and telling the members that they should hire a member of his staff?

The only real role he plays is that during the Prop. D, he and Sheriff Paul Miyamoto signed a memorandum of understanding putting DPA in charge of investigating complaints against deputy sheriffs.

The August 21, 2020 letter to Breed outlining the arrangement reads as an argument against Proposition D. Despite this ruling, the measure passed with over 60% of the vote.

To date, the DPA has not produced any reports describing disciplinary activity against anyone within the sheriff’s office. And, as Assistant City Attorney Jana Clark told the council, the sheriff could end this arrangement at any time.

The new agency will replace the DPA. So why would the head of the DPA have a role to play in hiring the new inspector general?

More: Wechter said in conversations with Henderson, he got the impression the mayor’s office had already approved a new chief of staff for the office. “Has anyone been hired as a staff member [other than the board secretary]?” He asked.

Clark said she would discuss it with the board via email, but “I don’t know if anyone has been hired.”

So the board has only met once, and the agency is still in its infancy, and there are already signs that the people who opposed Proposal D and who have failed in the accountability of the police also want to undermine this effort.