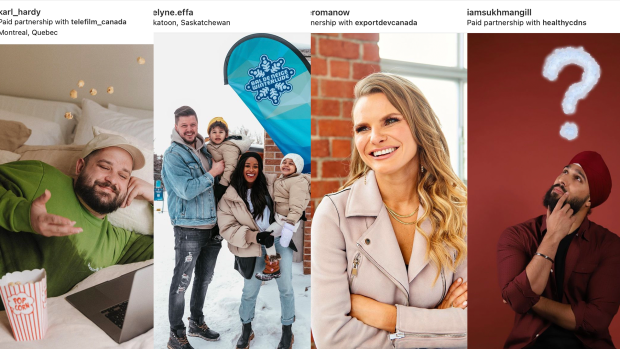 OTTAWA – In 2021, the Canadian government turned to social media influencers to promote federal initiatives on multiple occasions, from the rollout of the COVID-19 vaccine to Winterlude “holidays,” spending more than $600,000 in the process, according to a CTV News analysis.

Seeking influencers – social media users often with large followings who often use their platforms to make money by promoting products or events – to amplify government messaging is a relatively new strategy. deployed by jurisdictions around the world, and Canada is no exception.

According to a CTV News analysis of documents recently tabled in the House of Commons, more than a dozen federal departments and agencies have employed influencers to help get their messages across in the past year.

“Influencers or creators online do a really good job of creating a tight-knit community, a niche community, who have a common interest, shared experiences. And we know people are more convinced to change their minds about something. thing or change their behaviors when they connect with the message,” said Elizabeth Dubois, a professor at the University of Ottawa whose work examines the intersections of communications, technology and politics.

“And so influencers and creators are really good at tailoring messages to particular audiences. A big benefit of using these types of influencers to get government messages across is that you can reach specific communities.

The figures, released in response to a Conservative survey, show that among federal entities that disclosed their related spending between January 1, 2021 and January 31, 2022, Health Canada was the top spending department when it came to contracts with influencers. .

The bulk of their bill, which was over $130,600, was for an “influencer campaign in support of the COVID-19 vaccination marketing and advertising campaign.”

As part of this public relations effort, the department engaged the digital marketing firm “Mr & Mrs Jones Inc.” to help them plan and develop the campaign, recruit and pay influencers, and monitor the content produced.

“The influencer campaign complemented the Government of Canada’s overall strategy to help everyone in Canada make an informed decision about COVID-19 vaccines,” the department said.

More than a dozen influencers then used their accounts to share information about the Government of Canada’s vaccination campaign. Among them was self-proclaimed model and actor Sukhman Gill, who shared an article about making informed decisions when it came to rolling up your sleeve to get the COVID-19 vaccine.

“During these crazy times, there was a lot of misinformation being spread. Personally, I wanted to make sure I got the right information, so I decided to visit the Government of Canada website to learn more about vaccines against COVID-19. From the start, I learned a lot of things that made me feel much better and answered a lot of my questions, “he wrote to his close. of 20,000 Instagram followers.

The French-speaking influencer “@jemmyechd” posted a video explaining what influenced her decision to get vaccinated, encouraging her followers to visit the government’s vaccine information website. As of press time, his Instagram bio page still includes a link that directs people to this COVID-19 vaccine link.

Under this contract, and most others the government has disclosed, it was mandatory to publicly state that the content was sponsored and the influencer was paid by the government. However, this was not the case for all offers analyzed by CTV News.

Dubois said that as the government increasingly uses influencer campaigns, it’s important that paid government posts are labeled as such, describing the current landscape as “a bit of a gray area.”

Destination Canada was another federal entity that said it had contracts with influencers. The national tourism promotion agency said it had paid partnerships with NHL defenseman PK Subban and NBA player Kyle Lowry in 2021, but the agency did not specify which suppliers they worked with. , nor would they disclose how much they spent, saying it could jeopardize their strategies and “competitive position.”

Subban’s partnership was part of a “Canada is the Home of Winter” campaign and involved sharing a video “via paid and organic amplification” on the Subban and Destination Canada social media channels.

Lowry, who is not Canadian but is well known here for his time with the Toronto Raptors, also took part in a Destination Canada campaign with an unknown prize. The partnership saw Lowry participate and then share a video featuring him along with messages from fans saying they missed him because the team was playing basketball season in the United States due to pandemic restrictions, according to agency file.

For example, the department spent $120,000 on contracts with tour groups in six different provinces last December, including paying local influencers, to promote the Winterlude National Ice Carving Championship in their area this winter.

“Do you do vacations? I had actually forgotten how nice it is to get out of the house… Couldn’t have asked for a better weekend, the kids had an amazing time at the ice rink, looking at the sculpture on ice cream ! wrote Joselyne Effa, a Saskatchewan-based “lifestyle and family blogger,” in a post on her Instagram page, which currently has more than 18,000 followers.

A similar approach was taken by Canadian Heritage when it came to publicizing its “Christmas Lights Across Canada” event, seeing influencers in the National Capital Region post about the event.

To promote its See It All campaign last spring, Telefilm Canada worked with a dozen influencers, seeing them take to social media to promote Canadian cinema.

In a French post on his Instagram account, which currently has more than 40,000 followers, Karl Hardy, a self-proclaimed Montreal “instababe,” wrote about the role cinema has played in his life and promoting the online catalog. of Telefilm Canada.

“For government in particular, it could be very helpful to go with what are called ‘micro-influencers’, which are smaller-follower influencers who are truly connected to a particular community rather than to those on a very large scale,” Dubois said.

The Canada Deposit Insurance Corporation (CDIC), a federal Crown corporation, said it spent more than $95,300 on influence campaigns to promote confidence in Canada’s financial system, but did not revealed who she hired for the job, citing confidentiality considerations.

Explaining why they sought out influencers for this work, SADC said that “working with influencers to create posts that resonate with their community is an effective way to reach demographic groups that may not engage with influencers. traditional media channels”.

The Canada Council for the Arts, the Canadian Race Relations Foundation and the Privy Council Office have also taken an approach to reaching out to diverse groups and consumers of non-traditional media in their smaller-scale campaigns dealing with a range of issues, including Indigenous issues. History Month and disseminating culturally appropriate information about COVID-19.

Aiming at a wider audience, Export Development Canada (EDC) has partnered with well-known personalities from the Canadian business community to promote their work.

“Export Development Canada was my trusted partner in developing my business in the United States. It can be daunting to expand internationally, but it doesn’t have to be,” Romanow wrote, asking his current 60,000 Instagram followers to learn more about what EDC does.

In their filing, EDC noted that the cost of the campaign was more than paying influencers to post, it sewed in other costs, including production and management fees.

The agency also noted that the budget per influencer was “subjective based on the value of the influencer.” To determine this value, the agency said it took into account, among other factors, the level of influence based on the number of followers.

Assessing the value of influencer posts, including engagement stats, is something Dubois said is commonplace in the industry, though she cautioned that as turning to influencers becomes A more common advertising tactic, governments should put measures in place to ensure that their collaborators are not inflating their numbers through the use of bots or other account manipulation.

“These types of statistics that are used to determine the value of a given influencer can be manipulated. And we want to make sure that whenever the government spends money on these kinds of things, they do it in a way that will be, you know, a “best value” situation, he said. she stated.