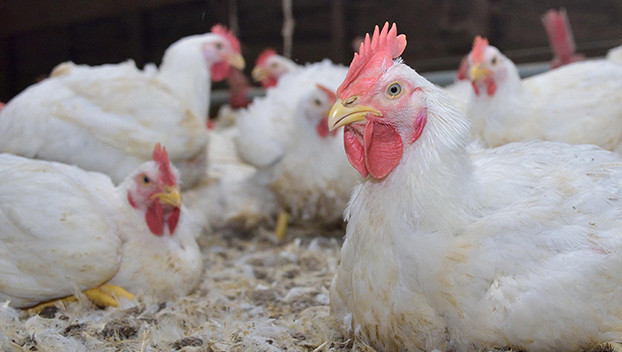 The Mississippi Animal Health Council is asking backyard bird owners to be vigilant in their biosecurity procedures after a flock of commercial breeding chickens in Lawrence County tested positive for highly avian influenza. pathogen, or HPAI. (Photo by MSU Extension Service/Kevin Hudson)

STARKVILLE – The Mississippi Board of Animal Health is asking owners of backyard birds to be vigilant in their biosecurity procedures after a flock of commercial breeding chickens in Lawrence County tested positive for highly avian influenza. pathogen, or HPAI.

HPAI is a highly contagious form of bird flu that can kill entire flocks of infected poultry. The virus can occur naturally in wild waterfowl and can spread to poultry.

The virus does not pose a food safety risk; poultry products cooked to an internal temperature of at least 165 degrees are still safe to eat. However, rapid spread can shut down commercial and backyard operations.

MBAH State Veterinarian Jim Watson said his agency has quarantined the affected site and is working with the poultry industry to increase monitoring of flocks across the state.

“Birds on the property have been depopulated to prevent the spread of disease and will not enter the food system,” Watson said. “Anyone involved in poultry production, from the small backyard to the large commercial producer, should review their biosecurity activities to ensure the health of their birds.”

Jessica Wells, a poultry specialist with the Mississippi State University Extension Service, said biosecurity is key to preventing the spread of disease. Producers should follow several steps, including washing their hands before and after leaving chicken areas. Do not recycle any litter or food from a suspect site for use as fertilizer or for any other purpose.

“Once bird flu has entered a flock of poultry, it can spread rapidly on the farm through the fecal-oral and respiratory routes due to the proximity of birds,” Wells said. “Items like clothing, shoes and equipment also transmit the disease, so it is imperative to wear shoes intended exclusively for the chicken area and to change clothes before entering.”

Do not handle dead birds with bare hands. To remove dead birds from a poultry area, turn two plastic bags inside out, take the bird and turn over and seal the lined bag with the bird inside.

“To get rid of the bird, place the bag in a household trash can or bury it with a shovel without touching it,” Watson said. “To store a dead bird for testing, use clear plastic bags to pick up and store the animal, and place it on cold packs until it can be refrigerated.”

Backyard bird owners can report any sick or dying birds using the Board of Animal Health web portal at https://agnet.mdac.ms.gov/MBAHReportableDiseases/publicreportingform or use the MBAH hotline in case of animal disaster at 1-888-646-8731.