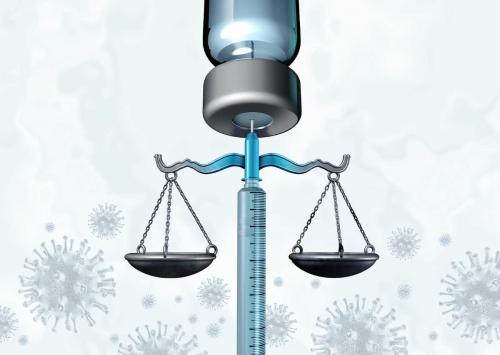 As the fate of two COVID-19 vaccination rules by federal agencies was decided in January by the United States Supreme Court, millions of employees working for the federal government, either directly or as sub -dealer, await further clarification. court orders halting presidential efforts to promote vaccination. Here is a brief update on the status of litigation challenging the extent of the president’s authority to command the executive branch.

On February 9, 2022, a divided panel of the United States Court of Appeals for the Fifth Circuit declined to lift the stay of Executive Order 14043, the executive order requiring vaccination against coronavirus disease 2019 for federal employees. This order, directing all federal agencies to implement a policy requiring all federal employees to be vaccinated against COVID-19, is one of two directives issued by President Joe Biden on September 9, 2021 as part of the his administration’s original plan of action (originally known as the “Path Out of the Pandemic” plan, which the Biden administration recently replaced with a new national COVID-19 preparedness plan) to fight the pandemic In progress. The stay had been issued by the District Court for the Southern District of Texas on January 21, 2022, in response to a request for a temporary injunction from plaintiffs led by a group of federal employees calling themselves “federals for freedom.” medical”. As noted in the dissent to the Fifth Circuit panel’s decision, a dozen district courts in other states, from Florida to Washington, had previously denied similar claims, but a single judge effectively halted “the exercise of the President’s authority over Article II [Executive Branch] employees.” Feds for Medical Freedom et al., c. Biden, no. 22-40043 to 3 (5and Cir., February 9, 2022, Higginson CJ dissenting).

The Federal Workforce Safety Task Force, tasked with developing and implementing guidance to help federal agencies maintain safe workplaces during the pandemic, released guidance after the prohibition of the vaccination mandate for federal employees, stating that the federal government would comply with the court order and take no action to implement or enforce the vaccination mandate while it remains in effect. The Fifth Circuit panel’s refusal to lift the injunction means, at least for now, that the federal government remains unable to proceed with President Biden’s plan to have every federal employee vaccinated against COVID-19.

The other directive issued by President Biden on September 9, Executive Order 14042, Executive Order on Ensuring Adequate COVID Safety Protocols for Federal Contractors, mandated the vaccination of all contractors and subcontractors doing business with the federal government (described here). This order sparked a flurry of lawsuits filed in several states. As we previously explained, this order was halted when a court in the Southern District of Georgia issued a nationwide preliminary injunction on the vaccination warrant for federal contractors. Four other district courts across the country have also issued preliminary injunctions of this warrant: the Eastern District of Kentucky, the Eastern District of Missouri, the Western District of Louisiana and the Intermediate District of Florida. An appeal of the Kentucky District Court’s injunction, which prohibits the enforcement of the contractor’s vaccine mandate in Ohio, Kentucky and Tennessee, has been rejected by the United States Courts of Appeals for the Sixth Circuit on Jan. 5, 2022. Appeals from Louisiana, Missouri, and decisions from Georgia are pending at the Fifth, Eighth, and Eleventh Circuits, respectively.

As with the mandate to vaccinate federal employees, the Federal Workforce Safety Task Force announced that the government would take no action to enforce the implementation of the executive order during and wherever orders or court injunctions prevent it from doing so. So far, only the Eleventh Circuit appeal has been fully briefed and will hear oral argument on the nationwide injunction issued by the Southern District of Georgia on Friday, April 8, 2022. The status quo is unlikely to change at any time before mid-April, so federal workers and contractors would likely have to wait until then to act on any related policies or initiatives.