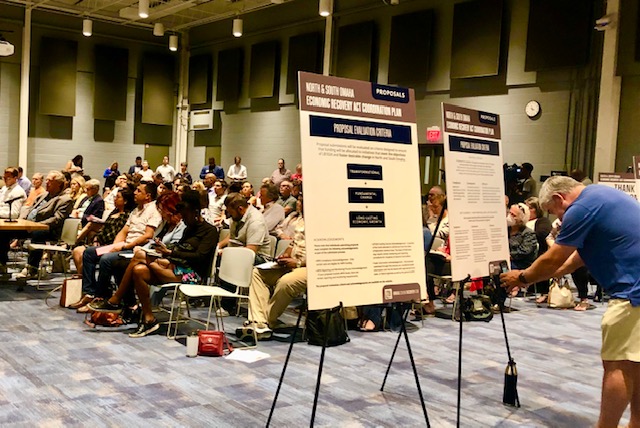 OMAHA — Ideas for bringing long-term economic vitality to South and North Omaha were released Monday as a series of town hall meetings began on how to spend millions in federal stimulus funds.

About 75 people attended the hearing before a special legislative committee on Metropolitan Community College’s south campus. A dozen people spoke, each for three minutes.

While the lawmakers who chaired the hearing said they wanted “transformative” initiatives, they also welcomed small thoughts that could combine with others.

Their overall objective: to identify a list of projects that best create well-paying jobs and sustainable economic growth in the targeted areas.

Some guidance comes with the $335 million that comes largely from the state’s allocation of the US Federal Bailout Act, including that it must be spent by 2026.

Wayne, State Senator Terrell McKinney and State Senator Tony Vargas are the main architects of the Economic Recovery Act, which passed earlier this year as Legislative Bill 1024 and provides the $335 million to rejuvenate South and North Omaha and other low-income communities disproportionately impacted by COVID-19.

Some of the funds have already been earmarked for some projects, such as a $60 million business park in North Omaha near the airport, but the majority is to be determined by the committee of seven lawmakers. The other members are Senator Mike McDonnell from Omaha and Senators Mike Hilgers, Anna Wishart and Brett Lindstrom from Lincoln.

Among the proposals heard on Monday:

Monday’s public hearing, which followed earlier meetings with business and agency leaders, was the first of four to be held this week. Financial and other experts were also on hand to provide applicants with technical assistance.

While community members were invited to submit ideas, they were told that proposals had to be officially received by October 10 via a special online portal.

A website has also been created detailing the process. The legislative committee, assisted by the Omaha-based consulting team Olsson, aims to select its recommended projects by December.

A final coordination plan is to be considered by Parliament in 2023.