It was another week of late nights and long debates in the Senate.

On May 3, the Senate introduced the House Bill 1878, a far-reaching election bill. One of the most significant changes it makes to our election laws is the enactment of a voter identification requirement. Importantly, the Missouri Supreme Court has already ruled twice that voter ID requirements were unconstitutional, as enacted by the General Assembly. Among other provisions, the bill prevents changes to state election laws within 26 weeks of a presidential election, prohibits the use of private funds for the administration of an election, and prohibits the use of drop boxes for the delivery of absentee ballots. While I have some concerns about several provisions of the bill, I am happy to say that it would create a no-excuse mail-in voting period two weeks before an election. After the Senate takes the final vote, the bill will return to the House of Representatives, which can either accept the Senate’s changes or seek to negotiate a compromise on the bill.

On May 4, the Missouri Senate worked through the night and into the early morning of the next day on several bills. House Bill 2400 amends the provisions relating to professional employers’ organizations. The Senate worked on more than a dozen amendments to the bill, before finally passing the bill. House Bill 2400 now returns to the House of Representatives for further consideration. Later that night, the Senate considered the 2005 House Bill, dealing with eminent domain, which is a tool for governments and certain public utilities to acquire private land for public use. This legislation requires compensation for agricultural or horticultural land to be 150% of fair market value. With this legislation, proponents hope to protect the property rights of Missourians in future eminent domain proceedings.

The General Assembly also passed the operating budget for fiscal year 2023. Throughout the week, conference committees made up of members from both houses met to resolve differences between the House and Senate versions. appropriation bills. Once all the conference committee reports were completed, they were sent upstairs for a final run through both chambers.

This week, my Concurrent Senate Resolution 27 was approved by the House Rules – Administrative Oversight Committee and sent to the entire House of Representatives for consideration. This resolution recognizes the need for mental health awareness training for high school students in public and charter schools.

The Senate Committee on Judicial and Civil and Criminal Jurisprudence continues consideration of House bills, hearing two bills on May 2:

Commerce Commission for Consumer Protection, Energy and the Environment:

The Senate Committee on Commerce, Consumer Protection, Energy and the Environment met on May 4 to discuss Bill 1861. This legislation provides that no hospital, physician, supply agency or other person may not review the COVID-19 vaccination status of a potential organ transplant recipient or donor at any stage of the organ transplant process, among other provisions.

Missouri voters will decide later this year whether to create a Missouri National Guard department after the Senate voted to ask the question on a statewide ballot. The House of Representatives previously approved the measure, House Joint Resolution 116, a month ago.

Currently, the Guard is part of the Department of Public Security, but by law it operates independently of this agency, and the Adjutant General already reports directly to the Governor. The proposed constitutional amendment will go to a general election ballot on Nov. 8, though the governor could exercise his authority to put the measure to a primary ballot on Aug. 2. Missouri currently has 16 state departments.

The City of St. Louis Personnel Department will be hosting a career fair on Saturday, May 21 from 10 a.m. to 2 p.m. The job fair will be held at the Friendly Temple Church Youth Worship Center, 5544 Martin Luther King. Jr. Drive, St. Louis, MO 63112. There are immediate career openings with the City of St. Louis, and during the job fair, individuals can meet with department officials to learn more.

The Department of Economic Development (DED) is currently recruiting for grant-funded positions to support initiatives under the American Rescue Plan Act (ARPA).

New staff members are needed for the operation of several initiatives, including grant programs for businesses, non-profit organizations, community development, broadband infrastructure and more. DED plans to hire more than a dozen ARPA-funded positions during the remainder of fiscal year 2022 and additional positions in fiscal year 2023. These positions will help develop programs, provide assistance technical support and to ensure efficient deployment of funds. Positions will be located in Jefferson City, with potential for other locations across the state for certain roles.

All those who are interested are encouraged to view available positions and apply online at mocareers.mo.gov. Details of planned investments using ARPA funds are available at ded.mo.gov/arpa. For more information about DED, visit ded.mo.gov.

Finding a Job with the State of Missouri

Interested in working for the state? Missouri offers many career opportunities for those interested. By visiting mocareers.mo.gov, interested applicants can search by agency, position, or location. This week, I would like to highlight opportunities with the Missouri Department of Mental (DMH). Previously, I worked for people with disabilities for six years as a DMH employee, and it was rewarding work. If you enjoy working with others, this may be for you. To learn more about the department, please visit dmh.mo.gov.

Join me as I will be traveling throughout the district during the month of May. The first meeting will take place this Saturday, May 7. See flyer for details. 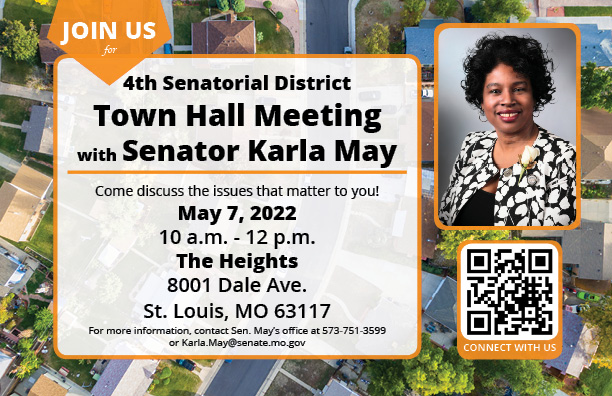