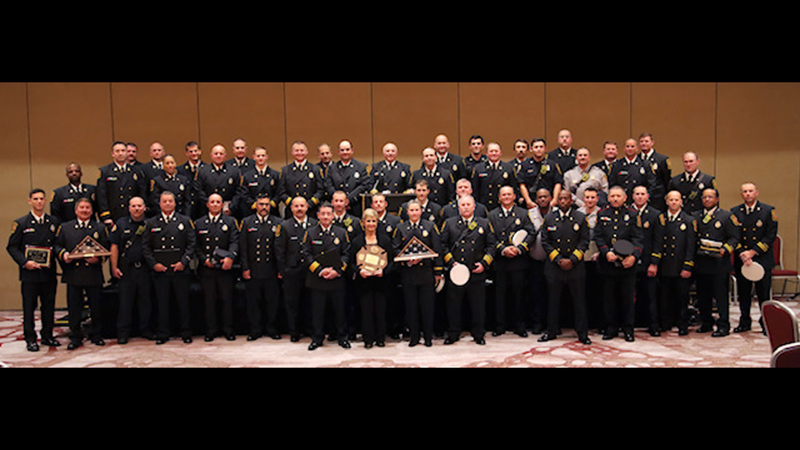 Suffolk Fire & Rescue honored its best and highlighted the department’s retirees and the hiring of 45 firefighters at its eighth annual awards and recognition ceremony.

“Service is the noblest of all actions,” said Fire Chief Mike Barakey. “That’s why we stop once a year to honor those who have gone above and beyond.”

The department previously announced the firefighter, paramedic and officer of the year awards in February and held its ceremony on November 4.

Lt. Lucas Weaver, who has served the ministry since 2001 and is a master firefighter, received the Firefighter of the Year award. He completed his associate degree in occupational safety and health, became chairman of the department’s health and safety committee in 2015 and was a member of the rescue technical team, reaching the level of technician.

Weaver also received the Department’s Medal of Merit for his work with the health and safety committee and the implementation of a cancer prevention initiative. He was also praised for his work in improving the health and well-being of the department.

Amy Dunn-Brown, firefighter / medic II and member of Suffolk Fire & Rescue since 2011, received the department’s Paramedic of the Year award. Dunn-Brown helps train other long-term care providers to maintain their certifications and coordinated the department’s MDA “Fill the Boot” campaign for two years.

Captain Leon “Bubba” Ratliff, the department’s training captain who has run 14 recruit academies – including a joint academy with the Portsmouth Fire and Emergency Medical Services – received the Officer Award. the year. He also helps organize training courses on the National Fire Academy and Virginia Department of Fire programs. He is also assigned to manage personal protective equipment for operations and city staff during the coronavirus pandemic.

Jeremy Gould, George Best and Corey Powell received the Medal of Bravery, while Travis Saunders, Craig Steele, Michael Joseph, Daniel Viejo and Todd Helmick received the Medal of Honor and Battalion Chiefs Steve Johnson and Demitri Wilson received the certificate of praise for their efforts. September 9, 2020, to assist the County of the Isle of Wight with search and rescue efforts due to flash flooding in Smithfield. While helping several Smithfield residents to safety, they were asked to respond at another location in Smithfield to an elderly man stuck in a van on a bridge due to a rapid stream of water.

“The courage shown by all involved, risking their own safety to save a life was without a doubt the truest measure of bravery,” Deputy Fire Chief Ted Adams said at the ceremony.

Firefighters Manuel Franco and Corey Stephens also received the Medal of Honor for their work in a single vehicle accident on March 20 on Portsmouth Boulevard. The vehicle was in the water and these two jumped into the water to help several people who were trapped.

“What makes this an amazing rescue is the fact that the car was underwater and they used the jaws of life – the (hydraulic) spreaders – to get that person out of there, and they couldn’t see what they were doing, ”Adams said. “The water was so cloudy that they worked on the touch to keep that person from being trapped in the car. They did a great job that day and saved a life.

Adams noted that the crash was anything but routine, and reports through the expedition mentioned several people trapped in the water and possible amputations.

Tim Sherman received a Meritorious Driver’s Certificate, a civilian award, for performing CPR on a family member who had suffered cardiac arrest.

Many others also received certificates of commendation for their efforts in responding to various incidents.

The ceremony also honored Barakey for his leadership in obtaining Suffolk Fire & Rescue to be a participating agency in Virginia Task Force 2, one of the 28 specialized urban search and rescue teams of the Federal Agency for the Management of emergencies across the country, responding nationally to emergencies and disasters. Suffolk has six task force members, some of whom were deployed during the building collapse in South Florida, the first deployment with the team.

The Fire Chief’s Award of Excellence went to Allen Lancaster, who died in August. After retiring from the US Navy in 2001, Lancaster moved to Suffolk two years later and served as department chaplain for 16 years. Barakey presented the award to members of his family, including Allen Lancaster’s wife, Darlene Lancaster, who said serving as Chaplain for Suffolk Fire & Rescue “was the greatest honor of his life.”

“With the passing of Chaplain Lancaster,” said Barakey, “we have a void in our hearts.”