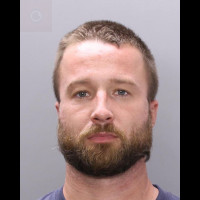 On December 19, 2021 at approx. 12:14 a.m., Slate Belt Regional Police officers were dispatched to 100 Blk. of N. Franklin St in Plainfield Township in reference to a “motor vehicle accident”. Slate Belt Regional Police officers received a description of the operator, who was last seen fleeing on foot. The vehicle was discovered to be from Justin A. TAYLOR. J. TAYLOR (matching the same description provided to officers) was in the parking lot behind the Slate Pub walking through a courtyard. J. TAYLOR refused verbal orders from an officer and began fleeing on foot. While running, J. TAYLOR was seen throwing a clear plastic vial (substance inside later tested positive for methamphetamine) from his hand onto the ground. After a short distance, J. TAYLOR stopped fleeing and was taken into custody. J. TAYLOR exhibited signs and symptoms of being under the influence of alcohol and a controlled substance. J. TAYLOR was found unable to operate a motor vehicle safely. J. TAYLOR’s vehicle has been secured pending the application of a search warrant.

J. TAYLOR was transported to the Bethlehem DUI Center, where he submitted to a legal blood draw for chemical testing. A search warrant was applied for and granted by Magistrate District Judge ENGLESSON. During the execution of the search warrant, officers found drug paraphernalia containing methamphetamine and a small amount of (raw) marijuana. J. TAYLOR’s blood results contained the following; a 0.22% (ethanol), amphetamine and methamphetamine. Charges against J. TAYLOR have been filed.

DMV urges you to check online before heading to the office, in case of unplanned winter closure