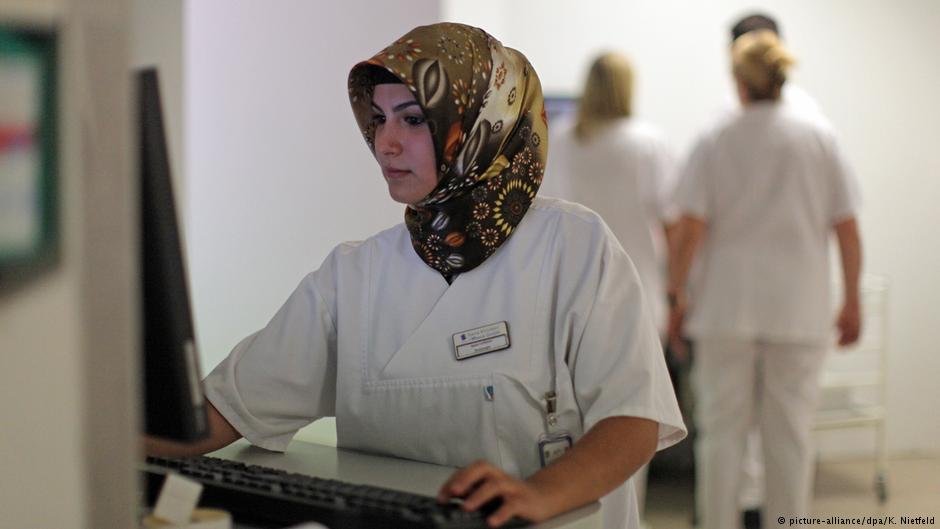 In Germany there are more migrants working in temporary jobs as subcontractors than in stable jobs. Some say this is a good thing, because it means migrants can enter the labor market. But are there also downsides to temporary agency work?

Over the past two decades, companies in almost every industry have increasingly opted for temp agencies, or “temporary” workers. In the sectors of metallurgy and electronics, security, logistics, transport, administration and offices, the prospects of “regular employment” diminishing – at least for some – being hired by agency seems to be a good option.

Temporary employment is when a worker is employed by an agency and then hired at other companies that need staff. The worker signs a limited or indefinite contract with the agency.

The hiring company pays fees to the agency, and the agency pays the salaries of “temporary workers”. All of the worker’s payroll, vacation and insurance transactions are done with the agency. Temporary employment agencies often use job search engines to recruit and regularly search for employees.

Temporary agency work became legally permitted in most of Europe in the 1990s. Since then, the highest rates have been recorded in the UK, the Netherlands and France.

In Germany, while the number of German citizens in agency work is declining, there are more and more people from Afghanistan, Eritrea, Iraq, Iran, Somalia and Syria in this form of employment. The director of the Thuringian employment agency, Kay Senius, said that “foreign workers” were filling the void as it had “become more difficult to find German staff”, according to the German channel NTV.

Ismail Darwish of Syria lives in Mönchengladbach, a town near the western border of Germany. He approached a temp agency after failing to find work in Germany in his engineering field. The agency found him a job with the massive online retail company Zalando, but he told InfoMigrants he felt he had no rights in the business. “Our contracts are with the agency, and they can fire me at any time,” he says. “This is what happened to a colleague of mine.”

It is often easier to find a job in a temp agency than directly with a company. This kind of work can therefore offer more opportunities to migrants like Ismail.

Marc Striewe, who runs a temporary employment agency in Germany, also says agencies can give migrants a chance to find their feet. “We don’t just give them a job, we also make sure that they open a bank account, have health insurance, etc.,” Striewe told German public radio. Deutschlandfunk.

Another potential benefit of agency work is that it often involves working in several different companies, which can allow the worker to gain experience and make professional contacts.

Additionally, agency workers are sometimes eventually hired as regular employees, according to Handbook Germany, a government-funded information platform for refugees and other migrants in Germany. Unfortunately, however, there is evidence that agency work is not a stepping stone to safer employment, according to the EU’s agency for the improvement of living and working conditions, Eurofound.

Felix Hoffmann, from the German Council of Trade Unions in Hamburg, wonders whether temporary agency work is really beneficial for migrants. He said Deutschlandfunk that the Council of Trade Unions does not consider this form of employment as the most sustainable or the best option for integrating refugees and migrants into the labor market.

Temporary jobs can also present challenges that permanent staff do not have to face: Moving from one work environment to another can be difficult and disruptive. This means adapting to new tasks, colleagues, workplaces and commuting to work, which can involve long commutes.

What are the rights of temporary workers?

In Germany, the rights of agency workers are defined in the Temporary Employment Act which was updated in 2017. Some agencies are also bound by sectoral agreements with unions that protect certain conditions for workers.

Manuel Germany lists some of the rights of temporary workers. In summary, they include:

Temporary employment agencies face severe penalties for employing migrants without a work permit – perpetrators can be fined or jailed for up to five years.

Handbook Germany warns that there are usually “bad apples” among temp agencies, that is, companies that do not follow the law. Law-abiding temp agencies are often members of professional associations, so it is a good idea to ask the agency or check their website to see if they are members of any of these organizations. before signing a contract.

More information: The English version of the website of the German Federal Employment Agency (Bundesagentur für Arbeit) is available here.

How does NHL free agency work? A complete guide to what you need to know before…