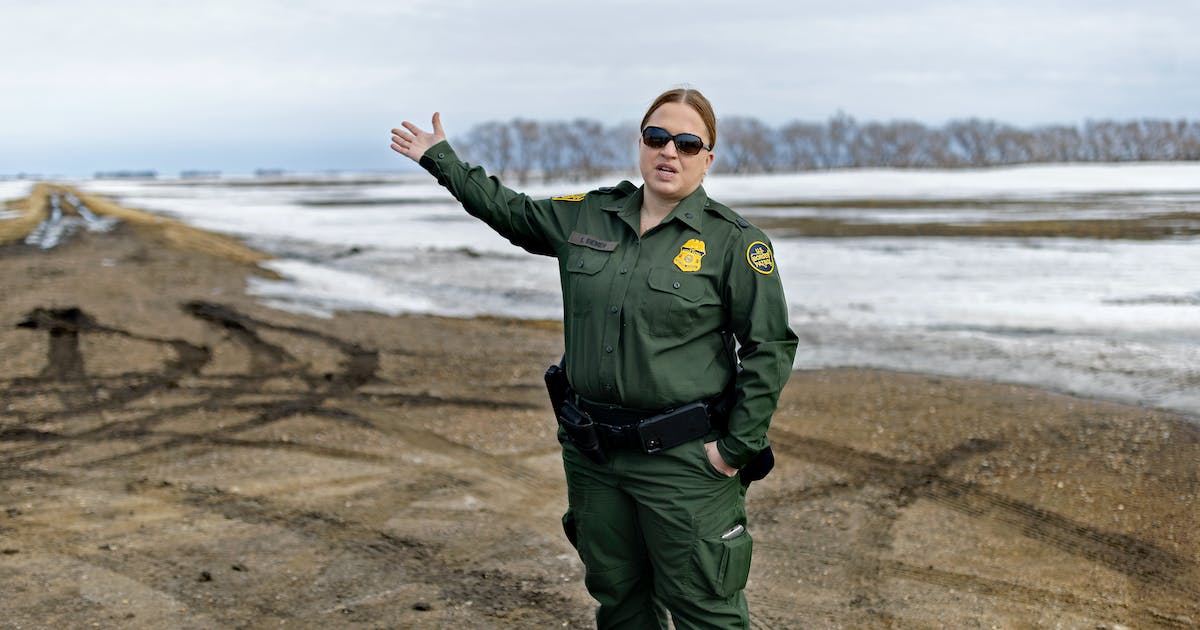 ST. VINCENT, Minn. — A 15-passenger van with Missouri plates rolled down a dirt road in a January blizzard, miles from anything but the Canadian border. For a U.S. Border Patrol agent surveying frozen farm fields in far northwest Minnesota, that was suspicious but not surprising.

He already knew it was a place of human trafficking.

A few weeks earlier, authorities on the Canadian side of the border had discovered a backpack containing a price tag in rupees, the Indian currency. Border Patrol agents saw footprints in the snow that day and then twice more the following month. They knew something illegal was going on.

But that January morning, they weren’t expecting the grisly discovery they later made after stopping the van: a family of four froze to death just meters from the border – a tragedy that left international headlines.

Although attention has long been focused on illegal southern border crossings, the path of least resistance for some smuggling operations is through the north, where the border is twice as long with an eighth of officers on patrol.

Agents caught smugglers bringing a small stream of Nigerians to Canada a few hundred miles west several years ago. Recently, they have seen a series of Indian and Romanian nationals entering the United States.

“We’re just looking for things that look different: footprints, vehicle tracks, a demolished fence,” said Scott Good, chief patrol officer for the Grand Forks area, which covers 861 miles of the northern border with less than 200 officers. . “You really are in the middle of nowhere, lots of places to get lost, no phone signal. It’s a tough, treacherous place.”

The Canadian border is far from having the same number of illegal crossings as the Mexican border; of nearly a million arrests by the US Border Patrol since October 1, only 3% have occurred at the northern border. But authorities can only guess how many more people escape detection.

The human tragedy these agents began to uncover when they saw the van with two Indian nationals in the back underscores a hidden truth about America’s forgotten frontier.

On that sub-zero January morning, officers arrested the two Indians along with the driver, a 47-year-old man from Florida named Steven Shand. Then officers spotted five other Indian nationals walking towards them and brought them back to warm. One repeatedly stopped breathing as officers rushed her to an ambulance; she survived after being airlifted to St. Paul for frostbite.

A man in the group said they were told to walk to a light – a small natural gas plant in the middle of the American prairie – then they trudged through snowdrifts for 11 hours. After discovering that others had been separated from the group, officers used a search plane and a drone to search for them. But it was Canadian authorities on a snowcat that made the harrowing discovery of the Patel family, who froze to death just 15 meters inside Canada: Jagdish, 39; Vaishaliben, 37; Vihangi, an 11-year-old girl; and Dharmik, a 3-year-old boy.

“When you think there might be a child out there, you get mad. You feel helpless,” said Kathryn Siemer, assistant patrol officer in charge of the border patrol station in Pembina, ND. “It shows although smuggling organizations do “They have no life value. They are numbers for them. They are money to them.”

America’s two land borders seem to be night and day: a steady daily stream of illegal traffic south versus a trickle north, extreme heat versus extreme cold, miles of border wall, towers of observation and X-shaped metal barriers against miles of natural barriers or open prairie, a strained relationship between the United States and Mexico versus a multi-generational partnership between the United States and Canada.

But regardless of the border, the job of a Border Patrol agent is surprisingly similar.

At the Canadian border, officers look for footprints in the snow or mud, a hole in a fence or a rock painted orange as a meeting point – anything that might suggest illegal crossings. In the south, officers pull giant tires behind trucks to smooth dirt roads so that footprints are more easily noticed.

“It’s almost a game of cat and mouse – we change one thing, they change another,” Siemer said.

On the southern border, work is reactive — when she worked in Arizona, Siemer sometimes processed 200 immigrants who had crossed illegally during a shift. Officers from eight Border Patrol offices in North Dakota and Minnesota have time to be proactive, visiting farmers over coffee, reminding them to keep an eye out. They enlist hunters and trappers, training them to call if something seems strange to them.

The increased attention to illegal immigration has brought U.S. Customs and Border Protection into the spotlight, but not always in a positive light, with social media making headlines about children in cages.

But the main purposes of border patrol include national necessities, such as stopping terrorism. If that sounds extremely rare, consider the case of Patrik Mathews, a white supremacist and former member of the Canadian military. The FBI arrested him in Delaware in 2020 on suspicion of plotting a mass murder. His car was found just north of the border near Roseau in August 2019; it is suspected that he crossed into the United States near there.

Many resources are used to disrupt drug cartels and human trafficking organizations. Americans are used to seeing these illegal activities on the southern border, but they rarely hear about them in the north. Even rarer are cases like the recent deaths at the Canadian border.

The Indian family who froze to death in January seemed an anomaly, but their journey was more familiar to residents of their village in the western Indian state of Gujarat.

Jagdish Patel took a desk job at a school, worked in a clothing company and returned to his home village of Dingucha to help out on his father’s farm. He struggled to support his family, according to Gujarati journalist Janvi Sonaiya. Like hundreds of others in their community, the Patels pursued the American dream as “non-resident Indians.” Their village is known as the “NRI village” because half of its 3,300 inhabitants live abroad. Billboards advertise aid for migration to America in hopes of joining a network of Gujaratis who run many small American businesses.

“The children in our village are raised with the dream of moving to the United States or Canada – and why not?” said Mathurji Thakor, the elected village chief.

Illegal Indian crossings into the United States have increased over the past decade, from less than 200 arrests in 2007 to nearly 10,000 in 2018, according to Border Patrol records. Most go through the southern border because it’s much easier to get a Mexican visa, but there’s been an uptick in the north. In 2019, 339 Indians were apprehended while crossing Canada.

Pandemic travel restrictions have seen unauthorized crossings drop precipitously. In 2018, the Grand Forks office recorded 461 smuggling arrests. Last year, that figure fell to 85. But the easing of travel restrictions will likely lead to a recovery; the UN Refugee Agency estimates that 82 million displaced people are seeking refuge around the world and that millions more refugees are created by the Russian invasion of Ukraine.

This does not change the strategy of the 2,000 agents patrolling the 4,000 miles from the northern border: vigilance in monotony.

One recent morning, Johnson, the patrol officer in charge of Warroad, looked out the window of an SUV heading west on State Highway 11, the highway closest to the border. Miles of flat nothingness passed. Two bald eagles feasted on a deer carcass. Farm fields, soon to be planted with corn, soybeans and sugar beets, were filled with ponds of freshly melted snow.

Johnson told a story. In 2017, while working in Portal, ND, officers found abandoned suitcases on the desolate prairie. Investigators learned that a smuggling ring transported Nigerians to Disney World, then to Minneapolis, and then illegally transported them from North Dakota to Canada. Officers are stepping up patrols.

On a wintry day, local police saw five Nigerians – including three children – struggling in a minus 53 degree wind chill. Border Patrol agents raced towards them on snowmobiles. All were suffering from frostbite and hypothermia, and the youngest, about 15 months old, was nearly dead. Although one adult ended up having both arms amputated, all survived.

The biggest grief for officers at Warroad and Pembina, ND — the offices closest to the January tragedy — is that they were unable to save the Patel family and add four more rescues to that tally.